Erie Insurance is a leading insurance provider in the United States and an annual fixture on the Fortune 500. It has over 6,000 employees working out of more than 20 field offices, providing over 6 million policies to customers across 12 states and the District of Columbia annually. Since its foundation in 1925, Erie’s company tagline, “The ERIE is Above All in SERvIcE,” underscores the organization’s core value of commitment to customer service and quality.

Erie’s existing customer portal has been mobile-responsive for several years. However, the team at Erie recently identified the need to create native iOS and Android applications in order to satisfy demands for a continually improving digital customer experience. Erie doesn’t employ any mobile-specific developers, so they needed to find a solution where they could quickly execute on their requirements using existing resources.

Having already partnered with Mendix for more than 6 years on a comprehensive portal for commercial insurance agents–a system critical to Erie’s business–they were confident in the speed and flexibility of low-code and Mendix as a potential native app solution. At Mendix World 2021, Andy Luebke, Senior Solutions Engineer, and Mike Grimes, Senior Software Engineer, shared their story of how the agility of low-code enabled Erie’s app development process.

Some must-haves for Erie were total control over development, the capability to respond to feedback from business domain experts and iterate quickly, a focus on security, and to maximize what a native application could offer both now and in the future, including on-device features like biometrics, the camera, and the gyroscope.

Building a native application allowed Erie to focus on quickly getting their customers to the most desired actions, such as viewing ID cards, or making payments. Grimes, who acted as technical lead on the app project, said, “Making this transition to a native application gave us the opportunity to kind of reassess [our web-based portal] and see if there are any changes that needed to be made.” 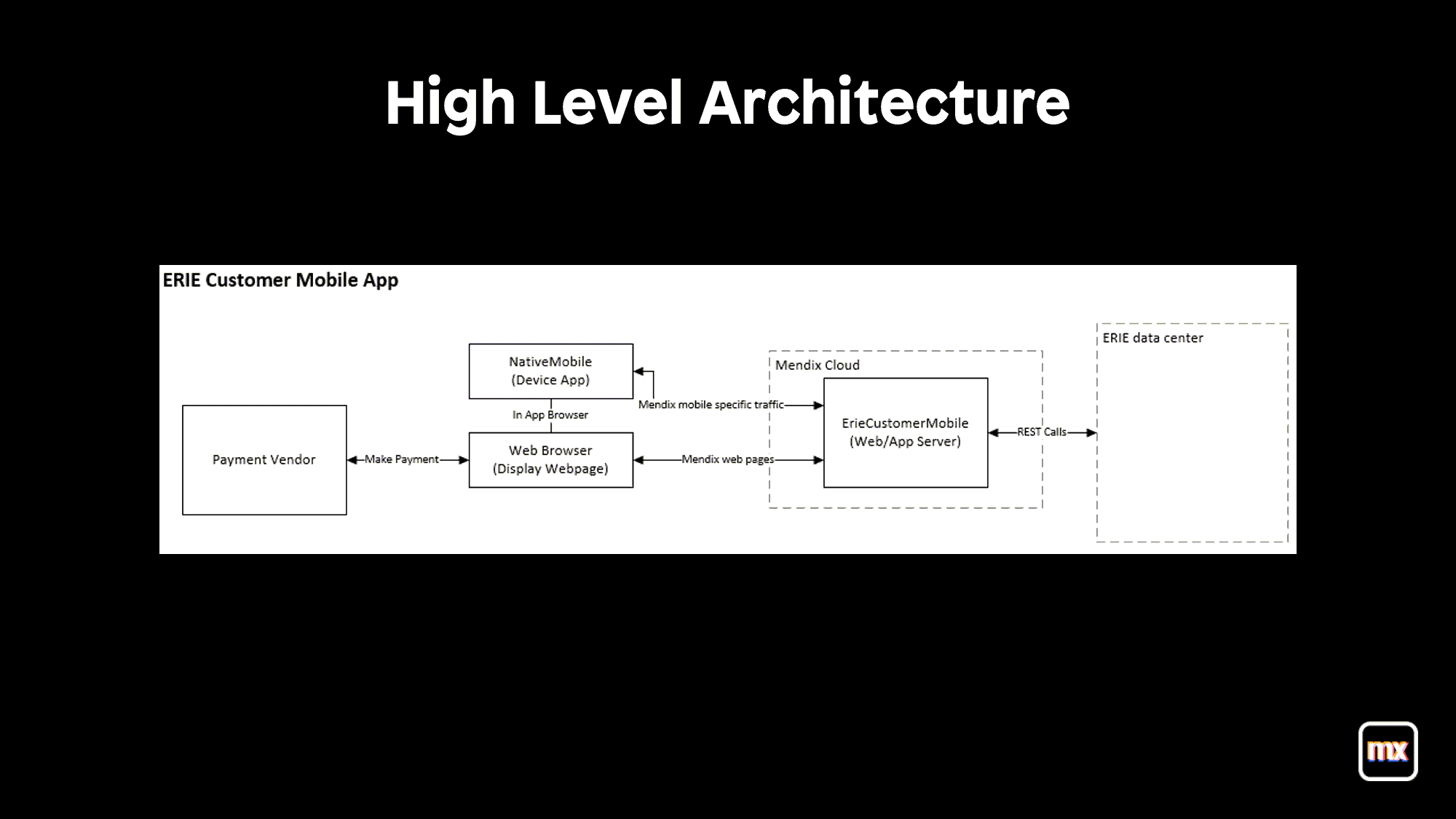 Immediately upon opening the app, customers can see where the Erie team seized the opportunity that native app development can bring. Customers can choose to use biometrics to log into their account, rather than relying on typing out a password, saving time and effort. One of the major features of the Erie app is the main page, which allows customers to quickly and easily access their policy information, payments, and ID cards. As Grimes said, “We wanted to make sure that the primary actions were put at the forefront.” This is accomplished by using the Mendix platform’s nanoflow-to-microflow workflows, which allow the app to trace back to Erie’s data center, reflecting an emphasis on security and reusability. Secondary actions, which may have been more prominent on a web-based interface, are placed into menus. The team at Erie used custom code to further their work on the platform and created several custom widgets, including partial- and full-page modals. These allowed for an elegant and simple way to convey information to Erie customers. 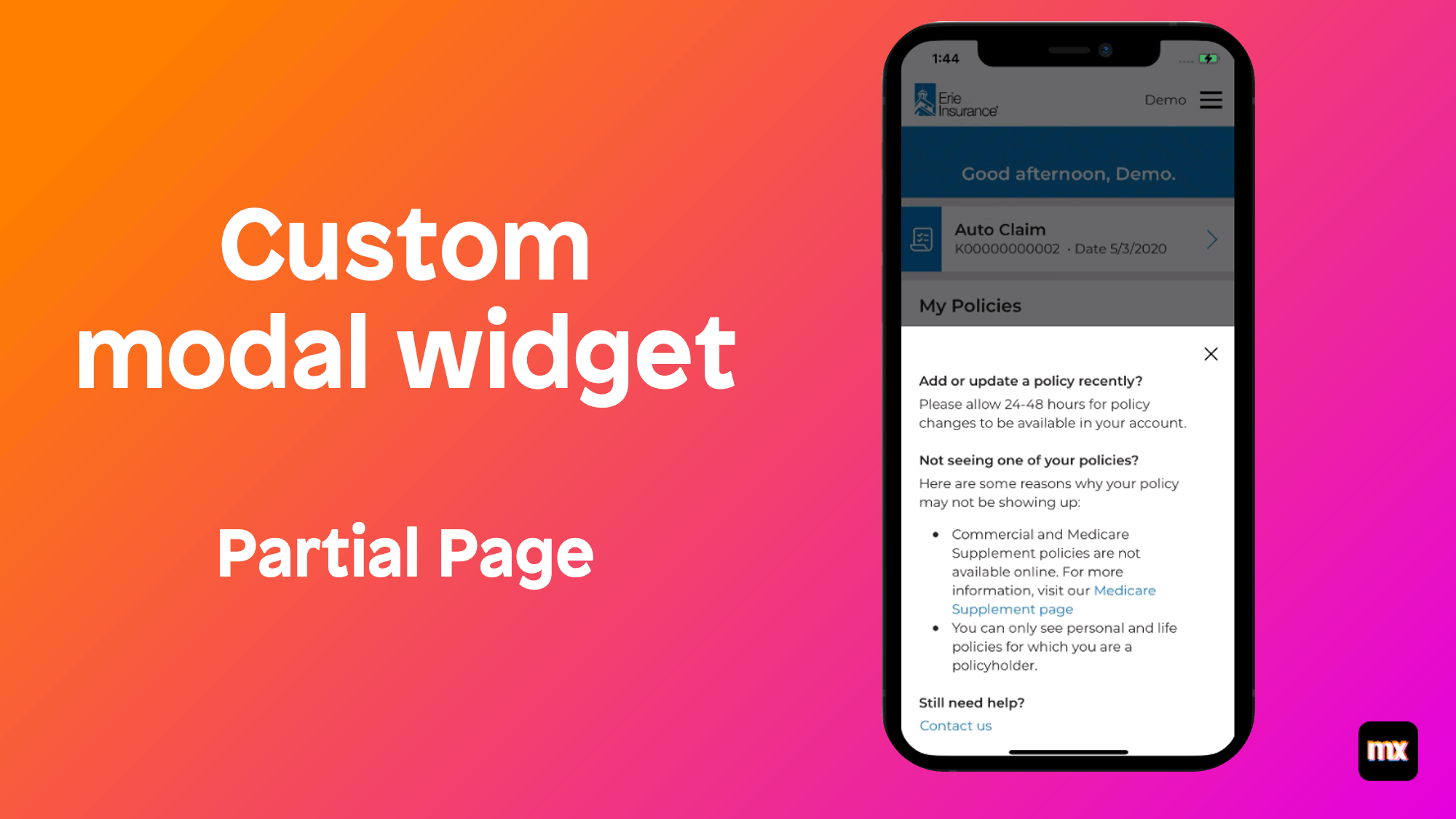 Another key outcome for the team was giving customers the ability to view, share and download PDFs directly within the app. This allows customers to view their ID card without having to move to a different environment. “Instead of forcing the customer to download the PDF and then viewing them in a separate app, we display it within our own application, making sure that they’re staying focused within our workflow,” said Grimes. These widgets were all built using React Native third-party libraries imported into the Mendix platform. Because the Erie team was new to mobile development, they faced a few challenges in creating versions for iOS vs. Android, as well as integrating their customized widgets into final versions. However, Mendix Studio Pro simplified the use of testing environments, useable either on an emulator or physical test device.

In addition, as the capabilities of the Mendix platform evolved, the Erie team found themselves utilizing more out-of-the-box features, rather than building custom components. In one case during development, the team at Erie built a custom widget to display SVG images within a React Native application. As this functionality was added to the Mendix platform, Erie moved away from their widget and toward the Mendix-created solution. As Grimes noted, “We usually prefer to try to keep with the base applications as much as possible, as it makes updates easier in the future.”

Today, Erie Insurance has both a native iOS and Android application available, which helps improve their digital customer experience, as well as their ability to match and outpace competitors. Without any mobile developers on staff, this could have been a big challenge. However, by choosing a low-code solution and partnering with Mendix, Erie now has the confidence and skillset to build and update native mobile apps within their existing resources, and an app which can help attract and retain customers for years to come.

See how to use Mendix to create apps infused with intelligent AWS services like Comprehend, Lex, Rekognition, and SageMaker.